Lomban which is Kwarcab Scouts as Chairman of Bitung, giving the embedding tatanpam to scout contingent who will join the competition

Through his direction, Lomban convey to the participants following the Jamnas can internalize discipline that starts from oneself, subservience coaches and scouts and rules of order.

I remind, keikutsretaan contingent to scout the achievement. Which, in the name of the destination Jamnas Bitung, because presatasi not be the main objective, which is most important to maintain health and build character through scouting activities, said Lomban.

Once again I remind the entire contingent of scouts match Bitung, do not push yourself to achieve performance, the most basic is to maintain your health. You're going to be healthy and vice versa. All property and equipment funded by the municipal government you Bitung, clear Lomban.

Bitung contingent Scout leaders, Julius Invite adding that this Jamnas participants were selected in November 2015, until being elected in 2016, there were 16 Men and 16 Women. The implementation Jamboree from July 11-21 August 2016 in Cibubur Jakarta and return to the city of Bitung on August 23, 2016. 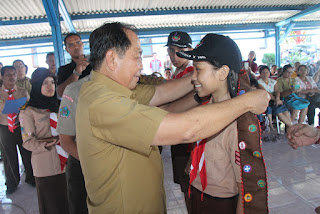